Hitting net zero will not be enough to save our planet from climate change and we must aim for ‘net zero plus’, said Sir James Bevan, the chief executive of the Environment Agency.

Net zero carbon means reducing the 51 billion tonnes of greenhouse gases released yearly into the atmosphere each year to zero.

At this point we will no longer be contributing to climate change, Bevan said, but it won’t be enough to reverse all of the damage caused and further effects will be felt for decades. Sea levels could still rise by up to 4.5 metres by 2300.

As well as achieving net zero we need ‘net zero plus’, argued Bevan. This involves adapting to ensure we are resilient to withstand a climate-changed world.

Infrastructure, cities and economies need to be built with resilience but within that lies an opportunity to improve, innovate and drive growth. Bevan argued that aiming higher would mean the difference between surviving and thriving.

He said: “Net zero and adaptation are two sides of the same coin. We need both, and the best of all interventions are those that do both at the same time.”

Bevan added: “Net zero and adaptation need to go hand in hand. Net zero is about making things less bad than they would have been, and that is a noble and vital endeavour.

“Adaptation is about making things better than they are, and that is an inspiring goal to which we can all subscribe. By doing them both together we can do what we all want to do and what the Environment Agency exists to do: create a better place for people and wildlife.”

Speaking at the Whitehall and Industry Group on Tuesday (16 March) Bevan also underlined the mammoth task of reaching net zero by 2050 to avoid climate crisis.

He said the Environment Agency’s current carbon footprint is 273,000 tonnes a year – with 54% coming from construction, mostly building flood defences, 11% from vehicles and 6% from pumping water out of people’s homes or around the country to reduce drought risk.

“There’s good news and bad news. The bad news is that we don’t yet know how we are going to do all of this, which is why we – and I suspect many of you – are in the market for sharing the best ideas, learning from others, and working in partnership to crack the issues we haven’t yet cracked.

“The good news is that we do know how to get much of the way there, for example with lower carbon concrete and a sustainable vehicle fleet, both of which we are already introducing into our own operations.

“There's other good news: the challenge of getting to net zero is driving a huge amount of innovation, growth, efficiency, and the right kind of disruption; and setting that target has been hugely motivational for our staff, all of whom are contributing their own ideas on how to get there.” 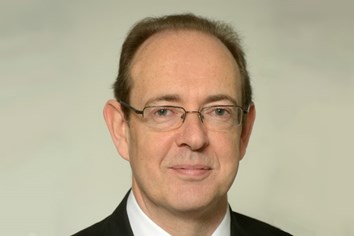