It was the keen eye of a senior EH officer from trading standards at Swansea Council that spotted ASK Italian’s lobster and king prawn dish was a bit ‘fishy’.

This led to the national chain, part of Azzuri Restaurants Ltd, being fined £40,000 by Swansea Magistrates Court earlier this month under the Food Safety Act for selling food with a misleading label as to its substance.

The lobster portion of the dish ‘Aragosta e gamberoni' turned out to comprise roughly 35% lobster, 35% white fish, and filler. Had the dish contained real pieces of lobster the ingredients would have cost £6.10 compared to the 70p cost of the ‘lobster sensation’ mix used.

The meal retailed at £14.95 and Swansea council estimates the company – which denied knowingly misleading the consumer – would have made a profit of around £3m on that dish alone between December 2016 and March 2019.

Angela Phillips spotted the problem while carrying out a routine food standards inspection in March last year. She decided it made sense to check the most expensive dish on the menu and her instincts were right.

Visually the raw lobster ingredient didn’t look right, and when Phillips asked to see the packaging it had come from, it became clear from the ingredient labeling that the pieces were not pure lobster. Trading standards also carried out further testing. 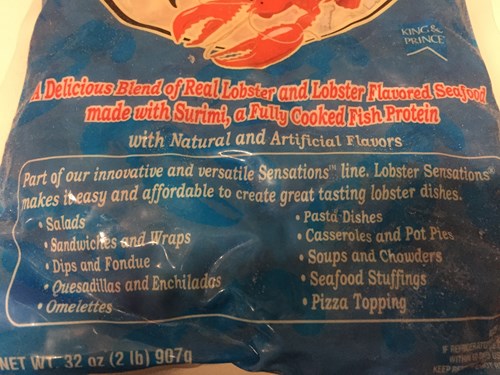 The packaging that alerted EHP Angela Phillips to the fact that the dish's 'lobster' label might not be entirely accurate.

According to ASK Italian, a previous 133 inspections – carried out nationally by EHPs and trading standards officers over the two and a half years in question – had failed to pick up what Phillips did. The district judge in the case commended the council for its actions.

Rhys Harries, Swansea Council's trading standards team leader, said ASK Italian tried to use the number of previous inspections as part of its defence. He added that the restaurant chain also pointed to positive reviews of the dish on tourism site Trip Advisor but failed to mention that there were also negative reviews describing the dish as ‘fishy’ – which Swansea trading standards also discovered.

Though ASK Italian made a substantial profit from the dish, Harries said he is satisfied with the fine. He said the fact that no one was injured, and the company made an early guilty plea, was considered by the judge awarding the fine.

Harries said: “It’s a big sting in the tail, [despite] the profit they made. But by far the worst thing would be the adverse publicity, which went viral. The following day we had press enquiries from all the tabloids. That will affect them more and I would hope other retailers would take that on board and look at what they are selling.”

Members of the public have commented on social media about the potential allergen risks of not labeling the fish content of the dish. However, Harries said the company did provide the correct allergen information detailing the full ingredients, when asked, in accordance with correct protocol.

CIEH Wales director Kate Thompson said: “This case is of national significance and demonstrates the value of routine, independent local authority checks to ensure food is safe and that consumers’ wider interests in food are protected. The majority of businesses are responsible and want to do the right thing, but there is always the temptation to deceive for financial gain.

“In this case consumers were misled and prejudiced. The undeclared substitution of food has the potential to present serious food safety risks.

“It is important to acknowledge the crucial work by local authorities in tackling such cases which are often complex and resource intensive. More needs to be done to ensure they have adequate resources to do this work.”

Emma Rose, project lead of Unchecked UK, which campaigns to protect checks and balances that safeguard the public, said: “Total interventions at food establishments have fallen steadily by 2010, by around 15% in relation to the number of food premises. While surveillance-led investigations are an important part of the toolkit, routine checks are essential in order to identify and mitigate risks before harm.

“Their decline means breaches will inevitably be missed, with poor practices taking place under the radar. The Food Standards Agency and local authorities should be acting to protect public health by increasing resources for food inspections, not scaling them back.”

ASK Italian released the following statement: “We take any matter involving our food and restaurants extremely seriously, including this charge which relates to the naming and menu description of our Aragosta e Gamberoni dish. Every one of our dishes goes through robust research, testing, training and review, with many receiving awards.

“In this case we made a genuine mistake in the incomplete naming of the dish for which we are very sorry. We had no intention of misleading our customers and would like to reassure them that ‘white fish’ was noted correctly within the allergen information available in restaurant and on our website.

“Immediately after we became aware of the issue, the fresh pasta dish in question was replaced by the Pasta Fresca King Prawn and Crayfish dish. We also ensured our team refreshed their training in labelling legislation and we continue to invest in state of the art systems and processes to ensure compliance.”