The rail union RMT has brought in its own speed restrictions in a dispute over noise on the London Undergound.

The union says workers and passengers are subjected to excessive noise that could be averted if Transport for London (TfL) removed Pandrol Vanguard track – which the RMT believes is responsible for much of the noise problems – and carried out more frequent track maintenance.

In a ballot last month members voted overwhelmingly in favour of industrial action short of a strike, which will be continuous from 10 October across the Jubilee, Central, Northern and Victoria lines.

The RMT asked TfL to introduce temporary speed restrictions to “alleviate the distraction, discomfort and anxiety caused in the affected areas” but they have not done so. In response RMT members will enforce their own restrictions by driving trains in manual mode at a lower speed over Pandrol Vanguard track to reduce the noise created.

A spokesperson for the RMT said track maintenance had been cut while the use of the lines had increased, resulting in worn tracks that produced more noise. He said the Pandrol Vanguard was introduced to reduce the rumbling of the trains experienced by residents above ground, but that it had made noise in the tunnels worse.

He added: “We want them to invest in the engineering required to mitigate and avoid the problem. We are not prepared to let our members go deaf because of the cash considerations of London Underground.”

Under the Control of Noise at Work Regulations 2005, there is an onus on prevention and requirement for employers to eliminate the noise at source, or reduce it, as well as to maintain workplace equipment, which the RMT says the TfL isn’t doing. While in other industries protective equipment can help, the RMT argued this isn’t appropriate for drivers as it could jeopardize passenger and driver safety and the solution is improved track and rolling stock maintenance.

The union argued that there are audible alerts within the cab, including the passenger alarm, that the driver needs to be able to respond to and that they are in radio contact with colleagues almost constantly, which they need to be able to hear. In addition drivers need to communicate with platform staff.

The spokesperson added: “If you are working on a building site you might be able to put ear defenders on – but would you drive your car down a busy street without being able to hear what is going on? It’s about perception and being able to respond to what’s going on around you.”

Under the Control of Noise at Work regulations, above 85 decibels protective equipment is mandatory, and the exposure limit is 87 decibels. Yet mapping by noise and hearing experts EAVE, which produces safety equipment, suggested that decibel levels exceed this level frequently across the tube network going up as high as 96 decibels (see image below, click for larger version on EAVE website). 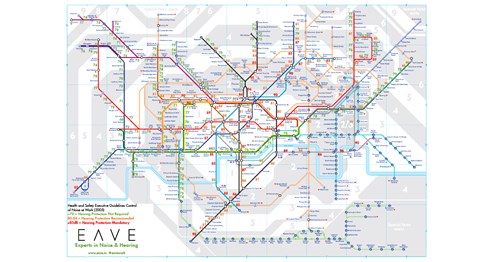 Exposure is about decibel levels and time. So according to the HSE noise calculator being exposed to levels of noise at 100 decibels, for example, for just 30 minutes a day is equivalent to a daily noise exposure of 88 decibels, which is above the exposure limit.

TfL released the following statement: “We have met with the RMT on a number of occasions on the plans we have to tackle Tube noise and look forward to continuing to work with them to find a resolution. The health and safety of our staff and customers is our first priority and we have already agreed to provide a broader range of ear protection to drivers who wish to use it alongside plans for longer-term solutions to this complex issue.”

A spokesperson for TfL said noise limits set out by HSE are over an eight-hour period so passengers should not be adversely impacted, and that the advice it has seen suggests tube noise is highly unlikely to cause long-term damage to staff or customers’ hearing. The company maintains that wearing protective equipment is safe.

The TfL spokesperson added that the methodology used by EAVE was different to that of TfL, and that the drivers’ cabs are more insulated that the passenger carriages – where the EAVE readings where taken – and so would be less noisy. TfL wasn’t able to provide the differences in noise levels as Extra was sent.

Dan Saunders, the chair of the Association of Noise Consultants (ANC), said: “Noise exposure is a function of the noise level and the period of time to which an individual is exposed in a typical working day. I suspect that in some places on the London Underground network sound pressure levels may be relatively high for short periods but for passengers who might only spend 15-20 minutes in this environment per day the risk to their long-term hearing is likely to be limited.

“Clearly, there may be a higher risk for London Underground staff, in particular drivers, who could typically be expected to have prolonged exposure to noise levels throughout their shift.”

However, he said: “Just like in any environment where individuals could have prolonged exposure to high noise levels there is the potential for hearing damage. In the short term this may be exhibited as temporary threshold shift, but it is not inconceivable that prolonged exposure over many years could result in tinnitus and gradual, yet permanent hearing loss.”

Richard Vivian, director of Big Sky Acoustics, which advises clients in the leisure industry, said in his experience it was important to protect hearing but not overprotect so workers feel isolated and reject the equipment, or use it incorrectly. The correct equipment combined with the proper usage was really important.

He said he had come across an example of a forklift truck driver technically ‘wearing’ earplugs, but placing them in his ears so that they were doing nothing because he wanted to be able to hear his surroundings. Standard foam earplugs can close off 30 decibels whereas a 10 decibel plug might be more appropriate in a case like this.