It says a lot about the British psyche that World War Two is a staple of our television. In colour and black and white, the conflict is endlessly re-lived in familiar formats – Nazi secret weapons, detectives in fedoras, newsreel footage of ruined cities.

This weird obsession speaks of a country that prefers to romanticise its past rather than engage with the present. At first sight, Wartime Farm, an eight-part, daytime series on BBC 2, is extremely familiar territory – fair-isle sweaters, tweed suits and sandbags, but, this time, set in the countryside. Made by the production team that had previously given us Victorian Farm, Edwardian Farm and Tales from the Green Valley, it sits firmly in the ‘reality history’ format, in which present day people are dropped into the past.

First shown in 2012, Wartime Farm is the kind of soft-focus, self-glorifying nostalgia designed to send viewers peacefully to bed on a Sunday evening. But, and here’s the reason for this blog, in the light of current events, the series has become both prescient and topical, which is why it’s being run again.

The title sequence common to all of the shows sets an apocalyptic theme: ‘The great British countryside’, it announces, ‘was the setting for one of the most pivotal battle of the second world …. Churchill called it the frontline of freedom.’ Behind the urgent narration, we see fields of wheat and dreamy country lanes, cottage gardens with wheelbarrows and hollyhocks. These people are going to beat the Nazis? Seriously? 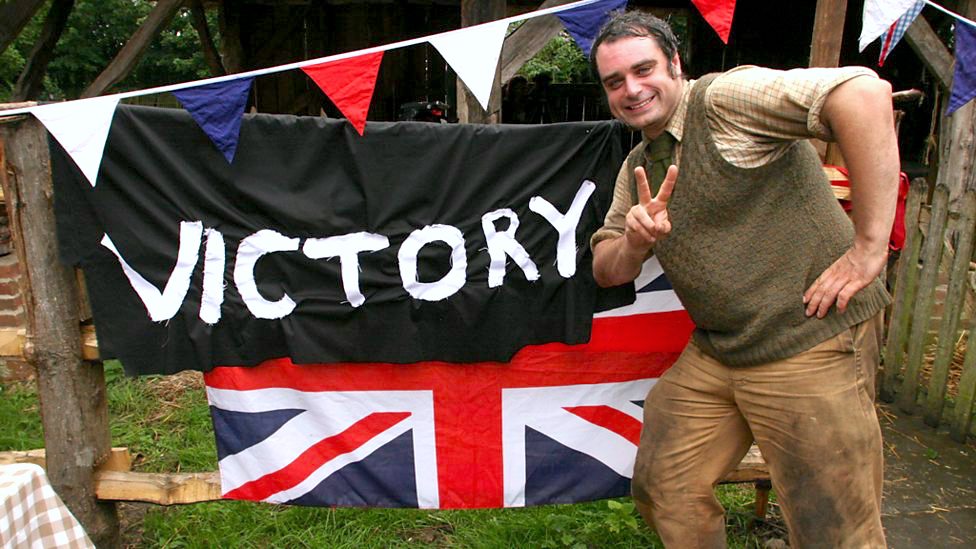 "The series has become unexpectedly relevant as we teeter on the brink of a food security crisis."

For once, the superlative-filled sales pitch of a TV series should command our attention. In 1939, Britain was a net food importer. Farms were barely mechanised and mixed and livestock-based farming was the norm. Only one-in-ten farms was on the grid. However, with the coming of war, it would be necessary to double food production – as the title sequence proclaims: ‘It fell to the farmers of Britain to save Britain from starvation’. Thus, the series, made long before Brexit came shuddering over the horizon, has become unexpectedly relevant, as we teeter on the brink of a new and self-imposed food security crisis.

In episode one, we see our three protagonists, historian Ruth Goodman and archaeologists Alex Langlands and Peter Ginn, move into the 62-acre Manor Farm, eight miles from Southampton. Arriving in an Austin 7, in vintage clothing and with a cute border collie in tow, they set to work transforming a relic from the 1930s into an efficient agricultural production unit, in line with the edicts of the local war agricultural executive committee (Michael Gove take note). Alert to German paratroopers they put lino in the kitchen and install a generator.

For this viewer, it’s a bit slow and formulaic. Faithfully, the hour-long episodes trot through Dunkirk and the fall of France, food rationing, the blitz, the Yanks arriving (will they save our bacon again?) leading us to D-Day. The series seems almost as long as the war was. It wasn’t supposed to be a practical documentary on survival. Sadly, that’s what it may turn out to be.

Wartime Farm was broadcast on BBC Two and is now available on iPlayer.

Allergens still at large thanks to legal loophole

What is the Food Hygiene Rating Scheme and why do only certain places have a rating?
Top